The saga of my relative homelessness, uncertain future, travel neurosis and dating a NICE man… Begins.

It’s official. I will be on a plane, blowing this popsicle stand, and off this continent come May 15.  My mandate is to scope the far corners of various hoods and revive my creativity as it has suffered from acute asphyxiation recent months, first by flying to the land of windmills, tulips, grass, and  really weird souvenirs…

Rotterdam, you’ve got me for 48 hours.

The Inquiry Mind: Cakes, Cannabis smoking is also legal in Rotterdam, no?

CM: Yeah. Your point? When in Rome…

Of course I did not choose to land in The Netherlands specifically for that. It just so happens that flying directly to the UK along with my travel companion –  Miss Schatze Big-Paws, is not possible due to animal import regulations. She would have to fly cargo separately at a whopping cost of $1700.  Therefore, it is only natural for me to want to save money by flying to Amsterdam first, spending 2 nights in nearby Rotterdam (never been and much cheaper accommodation) to chill and enjoy the fruits of the city.  Technically, I should probably forsake the Cannabis, before I have to be my charming self when I arrive to meet Sir English, who has very kindly and most generously offered to pick up yours truly at the ferry docks, along with said canine traveling companion…

After all I don’t want to show up looking like Keith Richards.

Heaven in a biscuit.

I give you the ‘Stroopwafel’ in all its sublime caramel goodness, in which I once had a 24-7 constant supply in my handbag during a one-week 2007 trip to Amsterdam, then later in 2011 during a stop-over – I bought an entire case consisting of 16 packages. This time around the slight danger being I arrive with a face like Keith Richards and a 2-day massive weight-gain a la Honey Boo Boo’s Mama June.

Shall I risk it?

Perhaps an exaggeration, but nonetheless I had further concerns.
Considering he is acting the gentleman, and offered to host me…
‘HOST:’ def.  A ‘sleep-over’ invite in a non-creepy context because I’m a sort-of tourist.

Thou shalt  wear respectable, appropriate sleep attire, as Sir English is of high moral fibre and not some slimy crappy-Fiat-driving MacDaddy creep from the old Ital hood.

Realistically I couldn’t very well bring along my regular springtime/summer sleep attire that consists of either a sheer Minnie Mouse red polka-dot baby doll, or ratty Wonder Woman T-shirt with pink gingham pyjama pants). However, seeing I DO NOT OWN respectable, appropriate sleep-gear for sleep-overs, I was forced to scavenge through local department stores only to find slick ‘sateen’ polyester robes and shorts made in china – perfect for sliding out of bed and hitting my head on a nightstand then taken away by ambulance attendants while dressed like Sugar Ray Leonard, otherwise ensembles made for a starring gigs at London burlesque shows. Therefore I was forced to comb to the far ends of cyberspace in a quest for the most fitting sleepwear.

Ka-ching!
Unassuming PJ’s reminiscent of a Japanese take out menu. 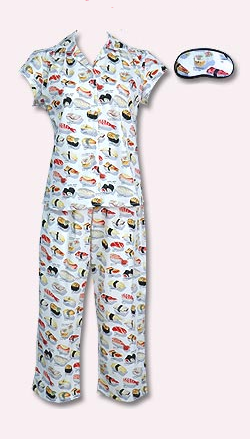 Make him think about food instead.

The saga of my relative homelessness, uncertain future, travel neurosis
and dating a NICE man…
Begins.

5 Responses to The saga of my relative homelessness, uncertain future, travel neurosis and dating a NICE man… Begins.