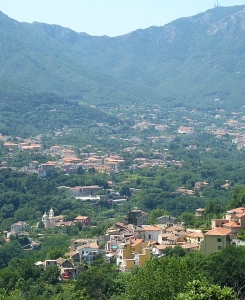 One of the main things that irks me about Italy is the noise. I have never lived in a place (until now) where people holler to this level of needless excess. People yelling into their cel phones, at their children, and especially when you are standing less that 2 feet away from them having a normal conversation. I suspect it is worse here in the south as I have visited other parts of the country, where it seemed less exaggerated.

In  February 2011, I finally found my own quiet (Italian) country paradise, almost  perfect save for the exceptions of one cheap-ass landlord and a really annoying  rooster, owned by a neighbor, that had no concept of sunrise/sunset and the most  appropriate time to crow. However, I count my blessings as all that pales in comparison to my first apartment in the nearby city of Salerno being subject to ‘Stalker-ex’ barging in like the Gestapo at 1AM shining a flashlight in my face to see if I was alone, the heavy metal drummer practicing in the garage space next door on Sunday mornings, and the many shop and car alarms going off at all hours. Then 5 years later there was my second apartment in the village of Benincasa, where the villagers did everything but run me out-of-town wielding axes and burning torches.

Alas, here is where I live now…

“I am located in a quiet country hillside village called called Marini, in the province of Salerno, nestled in the hills slightly back from the Amalfi coast which is 15 minutes by local transit from the beautiful city of Cava dei Tirreni (pictured here) – where you can find restaurants, wine bars, and many outdoor cafés where you can sit back and watch the elegant locals, and ‘La Dolce Vita’ unfold.”

In case you didn’t know – I do Bed and Breakfast out of my apartment. It’s not like I own some big fancy-shmancy Inn like Newhart or anything… I rent a room to travellers, and I call it “My Salerno Apartment” (shameless plug) – as it’s in the province of Salerno. Basically I am super-nice nice to people, smile a lot, give them a clean room, good breakfast, and tell them amusing stories about Italy – if they are up for it.

Obviously I don’t tell ALL my guests I am online blogging about my web-dating exploits, (current) non-existent sex life, Italian creeps trying to infiltrate my personal ‘zone,’ or even sometimes their own moronic behaviour…

What would they think? 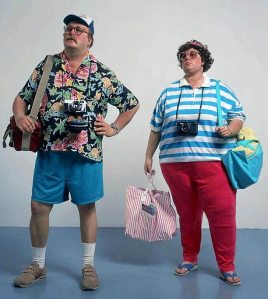 They they sometimes look like this and buy pudding, frozen cutlets, vino from the tetra-pack, and are JUDGING ME NOW.

Like most, they have no idea about this place – What it’s really like.
How can you see real life when you’re only here for 2 weeks and you’ve got rose-coloured glasses, thick like wind-shields riveted to the side of your head?

But if you want to know the real truth… This is what living in Italy is like. I swear.

I want my own tailor-made version of ‘Newhart’ though. (Technically, I am almost ‘there.’) I’ll secretly call it ‘The McCain Show’ and I’ll have a similar theme/intro with music by Henry Mancini, but there would have to be some accordion in there somewhere because this is Italy. As soon as I’d wake up every morning my theme music would begin to play. (It would be kind of like a Truman Show scenario – only I’d be the only one in on it). Unlike Newhart, I wouldn’t have a Tom Poston handyman, a snotty blond chambermaid with a pole permanently wedged up her backside, or three nitwit brothers always dropping by – 2 of which are both mute and share the same name. What I WOULD have is a nice, chilled-out, handsome partner – probably American, like the male version of Mary Frann, that ignores my homicidal moods during PMS, can make a mean risotto, is good with power tools, and generally helps around the house. I mean, I can fix walls and install electrical light fixtures myself, but he has to be able to do at least something and make himself useful (other than worshiping me and being a rock star in the sack.) 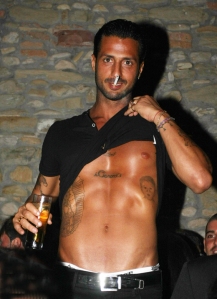 There will be one hot, Southern Italian MacDaddy in my show, ‘à la Roberto’ – with killer abs, that is fairly harmless and is always hanging around, staring at my ass, and trying to get with me when ever my hubby’s back is turned, but whom I am always shooting down and making fun of because he’s so pervy and gross. And what does he drive? You guessed it – a crappy blue Fiat.

Guest-starring would be my new housekeeper – as obviously this would all come together after my book gets published and I’d actually be able to afford one, as I’d have more in my wallet than 20EUR to last me a week, a bigger house, floors you could eat off of, and no more tumbleweed size dust-bunnies drifting from room to room. She would be short, with died-auburn hair, always in a house-dress like an Italian Mamma. She’d tell me I was too thin and make me amazing food – like pasta with a different sauce everyday, fried calamari, and Napolitano baba’ cake – so I wouldn’t eat cannellini beans all the time, and she’d say “MANGIA! MANGIA!” … and I’d be like “OK! OK!” (Most certainly I would have a home-gym so as to work off all the excess carbs and keep my ass from growing to epic proportions.)

Then there’d be the other local townsfolk with 3-wheeled mini-trucks and missing teeth that only speak rubbish dialect, give me free fruit and vegetables, and that I just pretend to understand by nodding a lot (aka. playing the dumb foreigner). Most certainly there would be all kinds of confusion and strange shenanigans due to all these misunderstandings.

A typical village ‘homie.’ What is he saying? I have no idea.

And of course there is my ‘real-life’ cast – my friends who’d tie-up the equation :

Lavinia: Who cuts through my immigration red-tape with a metaphorical machete and whom I recently taught dialogue from a scene from ‘Full Metal Jacket’ in a Vietnamese accent, and now every time I see her she greets me with: “Sucky sucky, me love you long time!” We ride the bus together often, act like 5 year-olds and laugh like hyenas.
Franca: The corduroy-wearing lesbian artist who is half American, She gets at all my jokes and laughs à la Ernie from Sesame Street, and smokes me up with hash that was brought from India likely via some small time drug mule’s butt-hole. (I stay in denial as it was likely in Saran wrap or in a red party balloon anyway.)
Paola: Art Gallery owner and my surrogate ‘Auntie’ who gives me juice boxes and Ferrero Roche when she sees me crying over homeless dogs and animal abuse posts on Facebook. She often tells me to shut up when I complain about men and tells me I am too picky. (She tried to set me up with a 50-ish cigar smoking psychotherapist with spaghetti arms and a Panama hat – Yeah, like I am too picky?)
Tani: My extraordinary holistic therapist/touchstone who gives a lot of hugs, talks sense into me most days, prophecizes about aliens and all of the world’s great (dead) prophets travelling in a spaceship and coming to rescue us all…
And finally her a boyfriend that I refer to as ‘Mr. Jesus’ who is über Catholic, enjoys porn, buys her Jesus paraphernalia (although she is non-diagnostic) and only wears Dr. Scholls without socks. 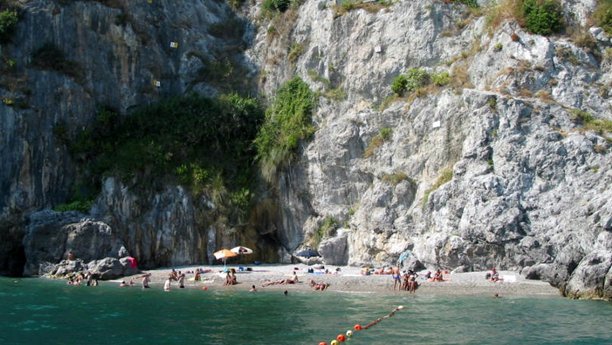 And when I needed to escape my McCain Show madness? I’d head over to my own (semi) private Utopia with my very own speedboat… OK more like a canoe (with a Canadian flag on the side) as I dig them more and it would make me feel more Canadian/ethnically diverse.

Of course all of my McCain Show/Walter Mitty fantasy is not set in stone or written on any acid-free scrolls and buried in a cave. Anything can (and does) happen in life.
So we will just have to see won’t we?

Did ya hear about it? That’s life. That’s what all the people say…
Each time I find myself layin flat on my face, I pick myself up and get back in the race.
Yeah That’s life, I can’t deny it. Many times I thought of quitting baby…
but my heart won’t buy it…

6 Responses to The Cakes McCain Show